This sculpture is carved in walnut to show a First World War soldier of the Australian army: Sergeant James Holland. Jim served as a machine gunner in the 7th Machine Gun Company. He arrived in Vignacourt during the severe winter of 1916, this is why he wears a sheepskin vest for added warmth.

His equipment was particularly interesting to carve, on his back can be seen all the items needed for bivouacking.  The intricate Machine Gun Company insignia is finely worked on his hat. The unit colour patch is also carefully carved on his left sleeve. The attention to detail demanded that even the muddy cobblestones be accurately reproduced. The story is on the website: www.vignacourt.free.fr

Abel THEOT is an iconic figure of the Louis Thuillier photos collection of Vignacourt. This is one of the first people that were identified regarding the citizens. His father and brothers had gone to war and he also had to support his family despite his age.

The sculpture was made in walnut with its apron and folds faithfully reproduced, to its wicker basket. This achievement was offered at the Saint Joseph's Catholic Primary School Childers QLD in November 2019 to continue the Franco-Australian exchanges ... 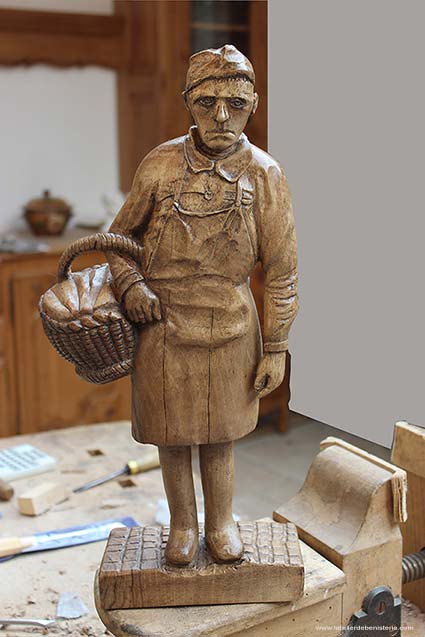